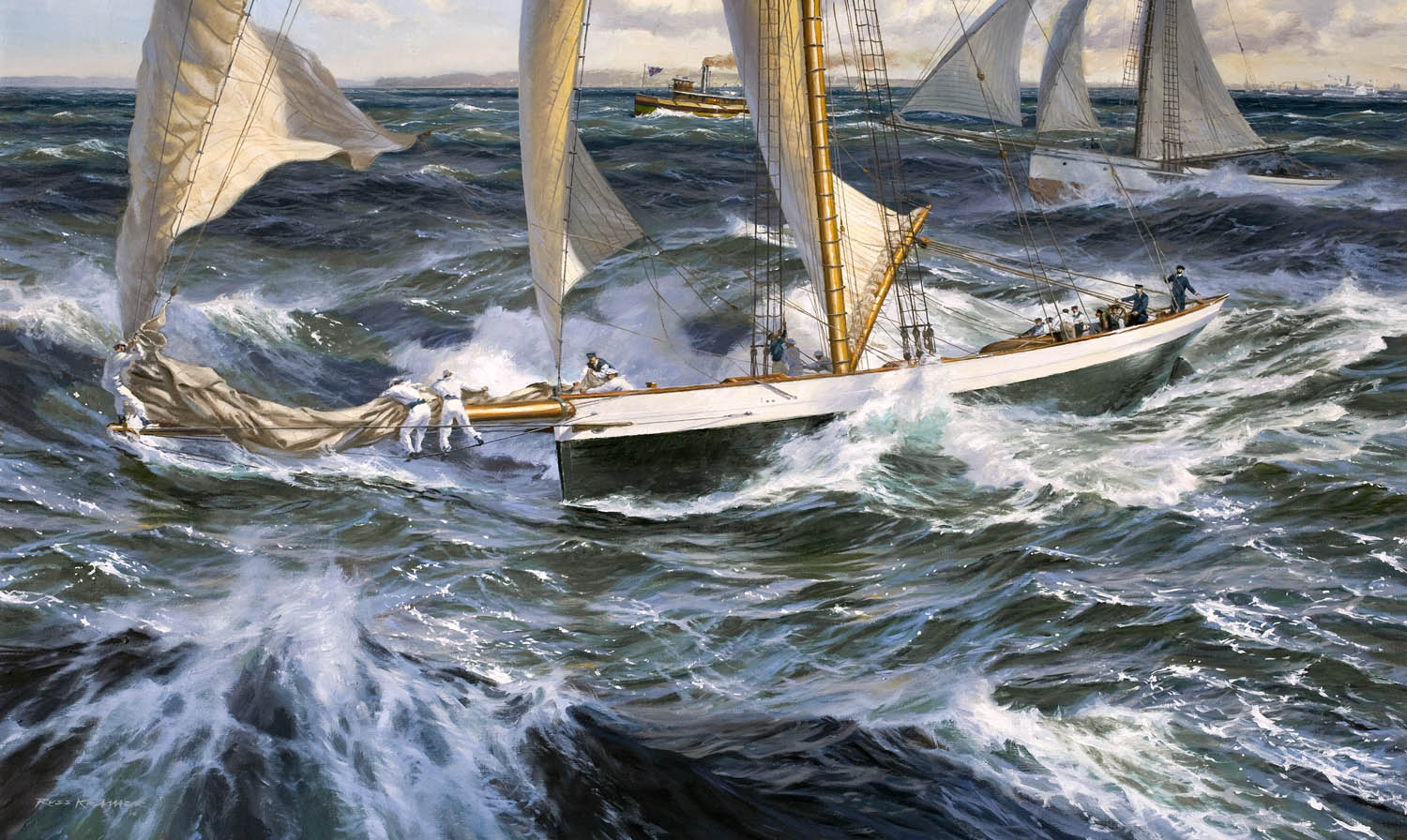 MAYFLOWER was the second of three successful America’s Cup defenders designed by Edward Burgess, a brilliant young Boston designer who would as a result of these successes find fame as one of the nations’s leading architect of racing yachts. She is shown shortening sail with GALATEA in the background; the challenger, owned by the eccentric Mr. and Mrs. Henn, lived aboard with a menagerie of animals. She was no match for the much faster and more professional MAYFLOWER.

EDWARD BURGESS
Designer of the sloops Puritan, Mayflower and Volunteer. Born in West Sandwich, Massachusetts in 1848. After graduation from Harvard in 1871, he became secretary of the Boston Society of Natural History and published several memoirs on anatomical subjects. From 1879 till 1883, he was instructor in entomology at Harvard. He travelled in Europe and, in an ameteur way, studied the principles of naval architecture. His success in this line was so marked that when, in 1883, a reverse of fortune threw him upon his own resources for a livelihood, he naturally turned to the desining of sailing yachts. Several of his boats won fame in eastern waters, and when in 1884 it became necessary to build a large sloop-yacht to rtepresent the United States in a series of international races, he was selected by a committee of Boston gentlement to draw plans for a suitable vessell. The famous sloop “Puritan” was the result and in the contest for America’s cup in 1885 she defeated the Genesta which had crossed the ocean to enter the contest. This was a remarkable triumph in view of the fact that it was the first attempt of an American designer to solve certain ship-building problems to which Englishmen had given their attention for a score of years. In the following season, Mr. Burgess brought out the Mayflower a sloop slightly larger than the Puritan and the Sachem, a large schooner-yacht that has shown remarkable sea going qualities. During the season of 1886, the Mayflower easily defeated not only all American vessels of her class, but distanced the English cutter Galatea which had come over in the hope of redeeming the Genesta’s defeat of the preceeding year. Source: ShipWiki

This painting traveled with the American Society of Marine Artist’s 15th National Exhibition and is now in private collection.