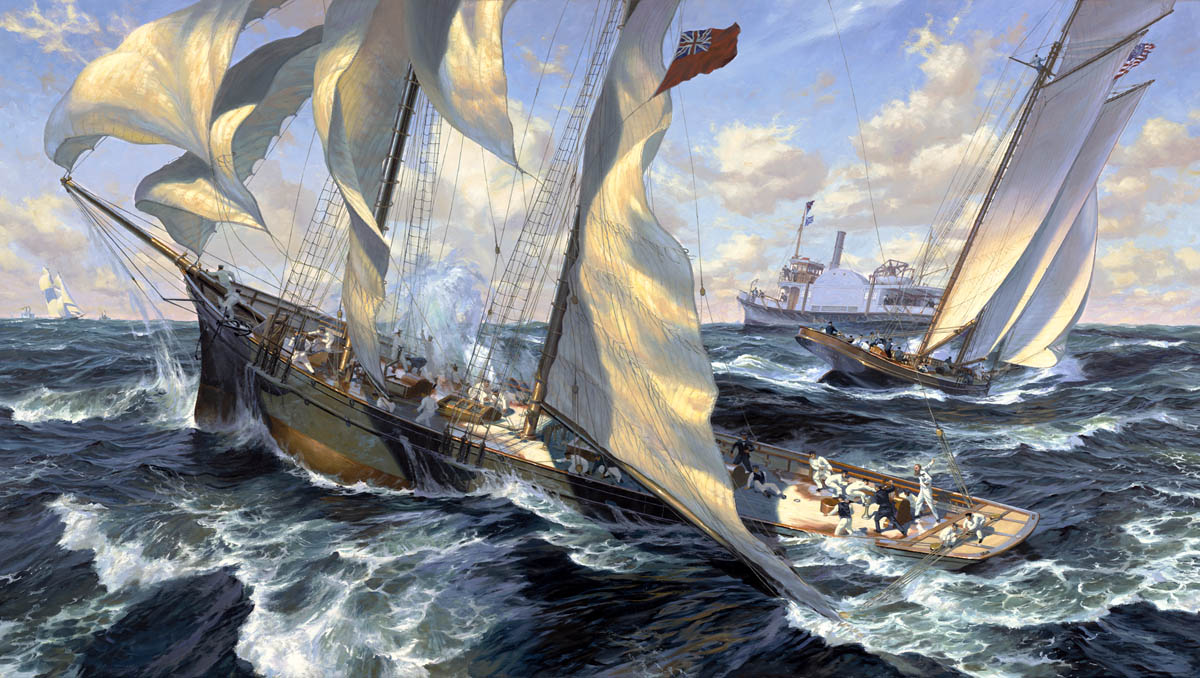 Not aware they had the option to leave the mark boat to port, 1871 America’s Cup challenger LIVONIA jibes around in a gale and pays dearly for it. Defender COLUMBIA, simply tacking around, gains the advantage. Here LIVONIA’s crew struggle to sheet in her wildly luffing sails as green water breaks over her quarter. LIVONIA’s owner James Ashbury, seen far aft, is livid; his protest will be dismissed by the NYYC.

James Ashbury, an English yachtsman, issued the first challenge for the America’s Cup in 1869. It was a complicated proposal for match racing on both sides of the Atlantic. This challenge was rejected by the New York Yacht Club, but Ashbury was not deterred. In 1870, encouraged by his schooner CAMBRIA’s wins in English waters over the American yachts SAPPHO and DAUNTLESS, Ashbury again challenged through the Royal Thames Yacht Club. On August 8, 1870, a single race was sailed with CAMBRIA pitted against seventeen New York Yacht Club schooners. The English challenger finished tenth and Ashbury, taking his defeat with good grace, remained to sail on the New York Yacht Club Cruise. He even entertained President U.S. Grant on board CAMBRIA.

In 1871, Ashbury, representing the Royal Harwich Yacht Club, challenged once more with his newly built schooner LIVONIA. The races were to be sailed one-on-one, but with the New York Yacht Club permitted to put up a different defender for each race, if it chose to do so. The plan was to announce the New York Yacht Club choice on the morning of each of the seven possible races. In the series, Ashbury’s LIVONIA was defeated in four out of five races. LIVONIA’s win in the third race would not be repeated by an America’s Cup challenger until 1920. Ashbury’s contentiousness during the races forced a change in the rules. Berated by Americans, as well as Englishmen, the New York Yacht Club decided that future challengers would only have to race against one defender. Ashbury, despite the controversies, has to be given credit for the removal of the injustice of sailing more than one vessel against a challenger, thus opening the way for better and fairer America’s Cup racing.

This original painting is available for purchase, $48,000. Please call the Russell Jinishian Gallery at (860) 245-4400 for more information.