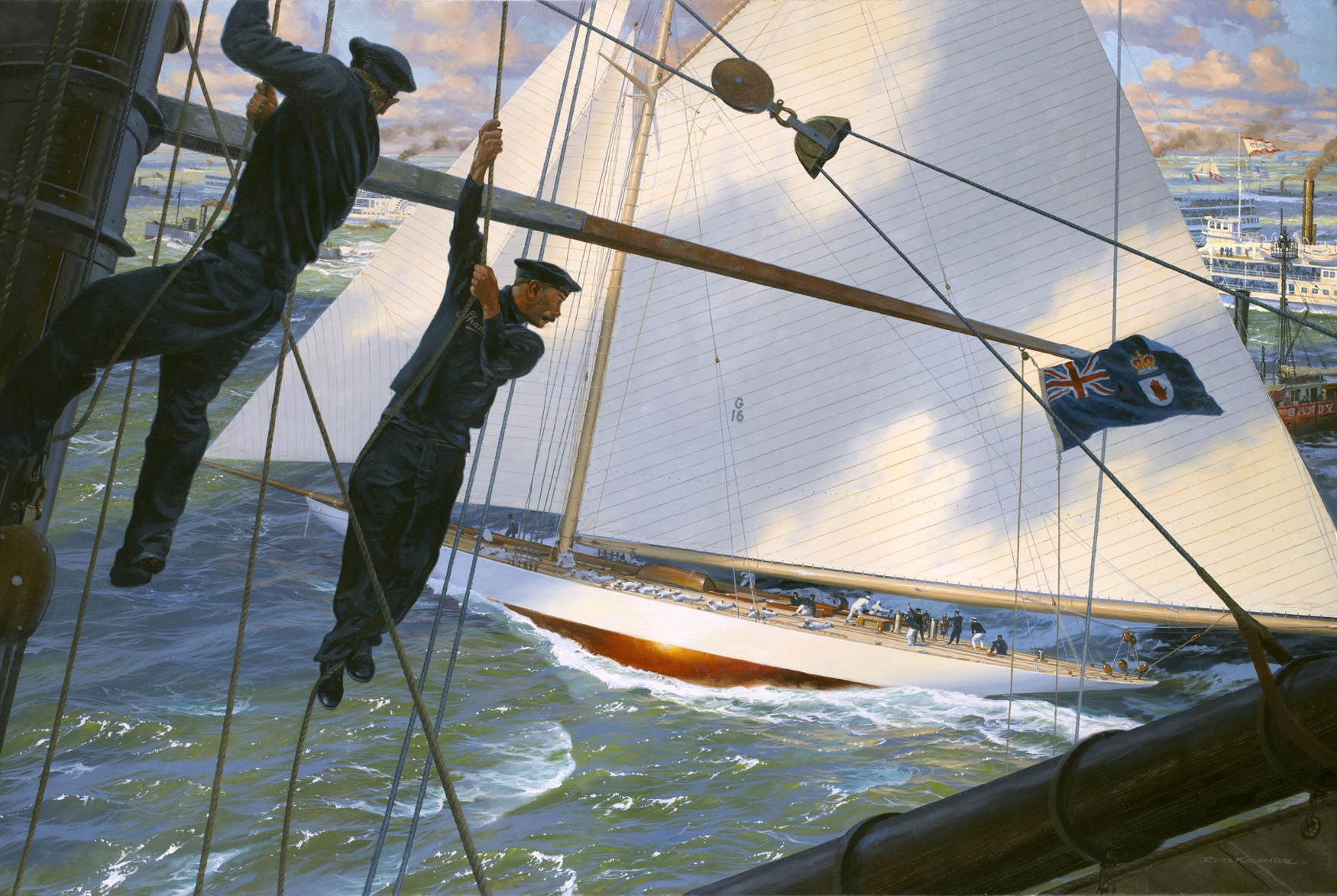 Crew high in the rigging of SHAMROCK III watch RELIANCE cross the start of the third race of the America’s Cup, 1903. The wiry daredevils who climbed to the top of these giant rigs to untangle lines or unfurl topsails were paid more then their mates on deck. It was said of them, “their only obstacle is death.”

Russ says: “In this painting I wanted to convey the vast size of RELIANCE, the largest single-masted sailing yacht ever built. By casting cloud shadows across her sails and pinching her into the composition, the viewer, along with the high-wire crew, have a birds-eye view of this enormous “Temple to the Wind.”

In 1903, the rule imposed only one major constraint on Herreshoff: the load waterline length of the boat couldn’t exceed 27.43 metres. The designer modelled a flat and modestly deep hull, similar to that of a scow. The biggest surprise came from the long overhangs: 6.70 metres
forward and 7.92 metres aft. Sailing close hauled, in seven or eight knots of breeze, the effective waterline length would stretch out from 27.43 metres to nearly 40-metres…a tremendous source of speed.

The keel, shaped like a fin, came down very deep. The boat would settle into a comfortable, fast, heel very easily, possible because Herreshoff managed to exploit the most improbably enormous sail area ever seen to that point on a single mast: a massive 1 501 square metres of canvas, approximately 186 square metres more than Shamrock III.

Due to the scale of the boat, and the loads on it, Nathanael fitted Reliance with uncountable innovations: Bronze Tobin hull, steel welded mast with a telescopic topmast sliding into the mainmast, two-speed winches, sheets and runners laid under an aluminium bridge covered with cork, a hollow rudder which could be filled or emptied of water depending on the point of sail. It would take all the effort and nautical wisdom of the incredible Charlie Barr to safely skipper Reliance through the Cup, along with a crew of 64. Source: WoodenBoat