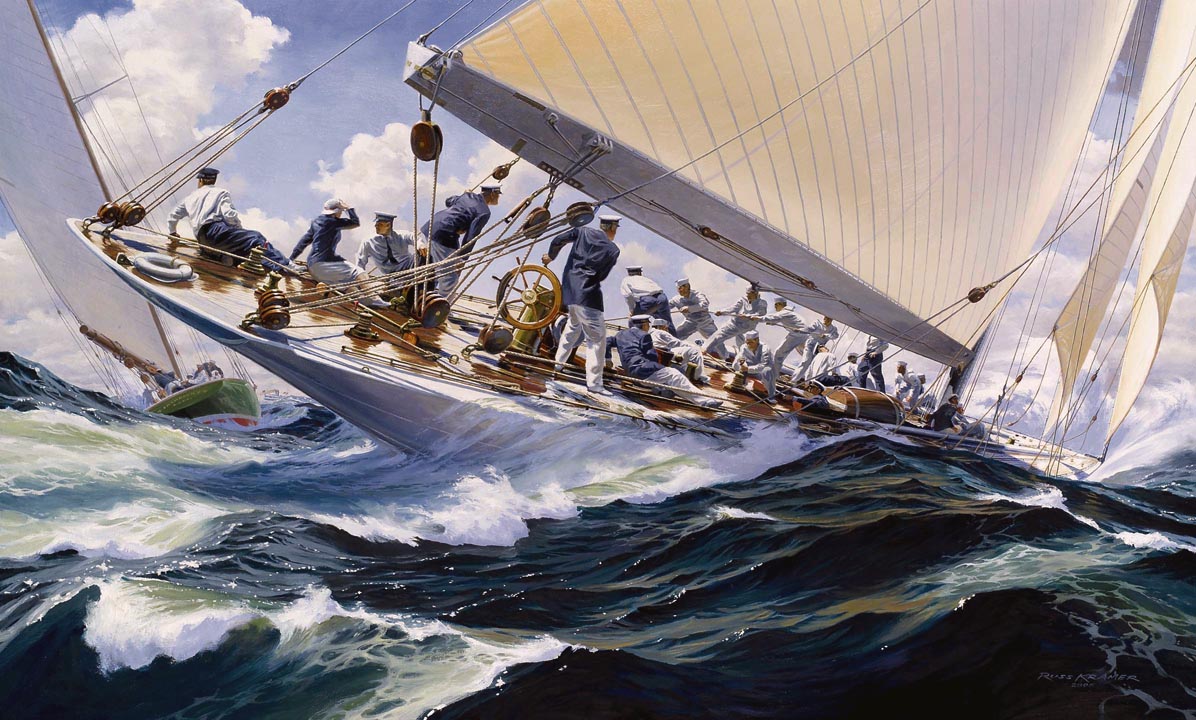 Mike Vanderbilt’s state-of-the-art Enterprise beats into heavy seas during the third race of the America’s Cup challenge, 17 September, 1930. On the opposite tack is Sir Thomas Lipton’s Shamrock V, already down two races in the best of seven series. Unable to take the pounding, in a moment Shamrock will lose her halyard and mainsail, handing an easy victory to Enterprise.

Russ Kramer writes: “I was fascinated watching old footage of J-Boats, and surprised to see how much these 120-footers seemed to pitch in even moderate seas. After reading about the 1930 challenge, and the blow that defined the third race, I imagined ENTERPRISE beating uncomfortably into the head sea, her stern in the air and her crew hanging on for dear life.”

Conceived at the height of the affluent 1920’s, the J-boats arrived during the Great Depression. They required enormous crews, and, despite expert attention to their technical details, still broke an astonishing number of masts. While they were in most regards the most advanced sailing yachts yet built, and they were indeed powerful sailing thoroughbreds formed in sleek lines that can race the pulse of almost every viewer, the glorious J’s proved too extravagant for their own good. Most had very limited sailing careers outside of America’s Cup. Ranger, whose 1937 cost was upwards of $500,000, was laid-up at the end of her debut season and never sailed again. All of the American J’s were scrapped between 1935 and 1941. Most of the British J’s were either abandoned or scrapped.

This painting won the 2011 Yachting Award at the Mystic International and was sold into private
collection.