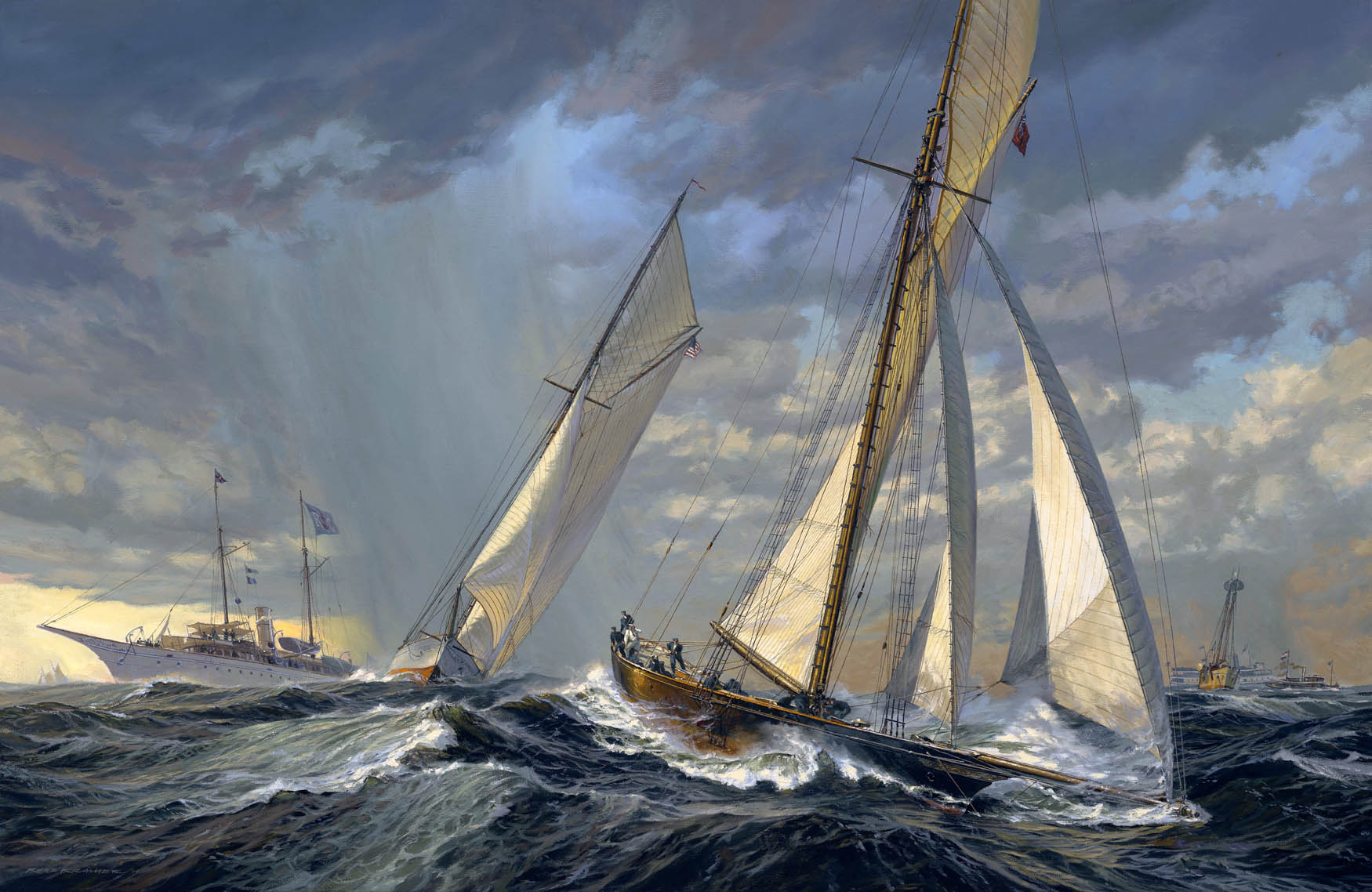 THISTLE, the challenger for the America’s Cup in 1887, crosses the starting line just ahead of the defender VOLUNTEER during the second race of the challenge on September 30th. In a stiff breeze and considerable seas, with scattered rain about, VOLUNTEER would soon pass THISTLE and go on to retain the Cup. The steam yacht ELECTRA, with the race committee of the New York Yacht Club aboard, and the SCOTLAND LIGHTSHIP formed the starting line outside New York harbor.

The New York Yacht Club’s cutter Volunteer; successfully defended the America’s Cup in 1887 against he Scottish Challenger Thistle sailing for the Royal Clyde Yacht Club. George Watson; then considered the most able English yacht designer; produced the challenger. Watson had been in the U.S. in 1886 taking notes on the best American Yachts. His design embodied the best features of the English Cutter; but with more beam for her depth; a cutter bow; and a cutaway stem. She had been of steel by Messrs. D.& W. Henderson; at Partick on the Clyde; and launched April 26; 1887. In her trials Thistle defeated the best English racers; decisively beating the prior America’s Cup challenger Genesta.

The Americans again selected their previously successful designer; Edward Burgess; who producedVolunteer; Boston’s third successful Cup defender.Volunteer was built of steel by Pussy & Jones at Wilmington; Del.; and rigged by George Lawley & Sons in Boston. She was Burgess’ fastest boat; considered a wonder in her time; and demonstrated her superiority from her first race. She easily defeated the previous defenders Mayflower and Puritan; and had a season’s unbroken record of victories.

After a challenge was resolved overThistle’s having a LWL measurement of 1.46′ more than her designer’s specification; the racing began Sept. 27; 1887. With the wind averaging only 8 knots; and local knowledge helpful;Volunteer trounced Thistle by 19 minutes; 23 3/4 seconds. The second race (as shown in the painting) was on a windward/leeward course in 12 knots of wind with a considerable sea running accompanied by some rain. On the 20 mile beat the boats sailed with equal speed; butVolunteer demonstrated superiority by pointing higher and eventually won by 11 minutes; 48 3/4 seconds corrected time; even though Thistle was faster downwind. This decisively ended the best 2-out-of-3 contest. The beamier; lighter American centerboard design again defeated even the advanced English cutter. Source: Blue World Web Museum

This original painting is available through the ICON Gallery in Alexandria, Virginia.