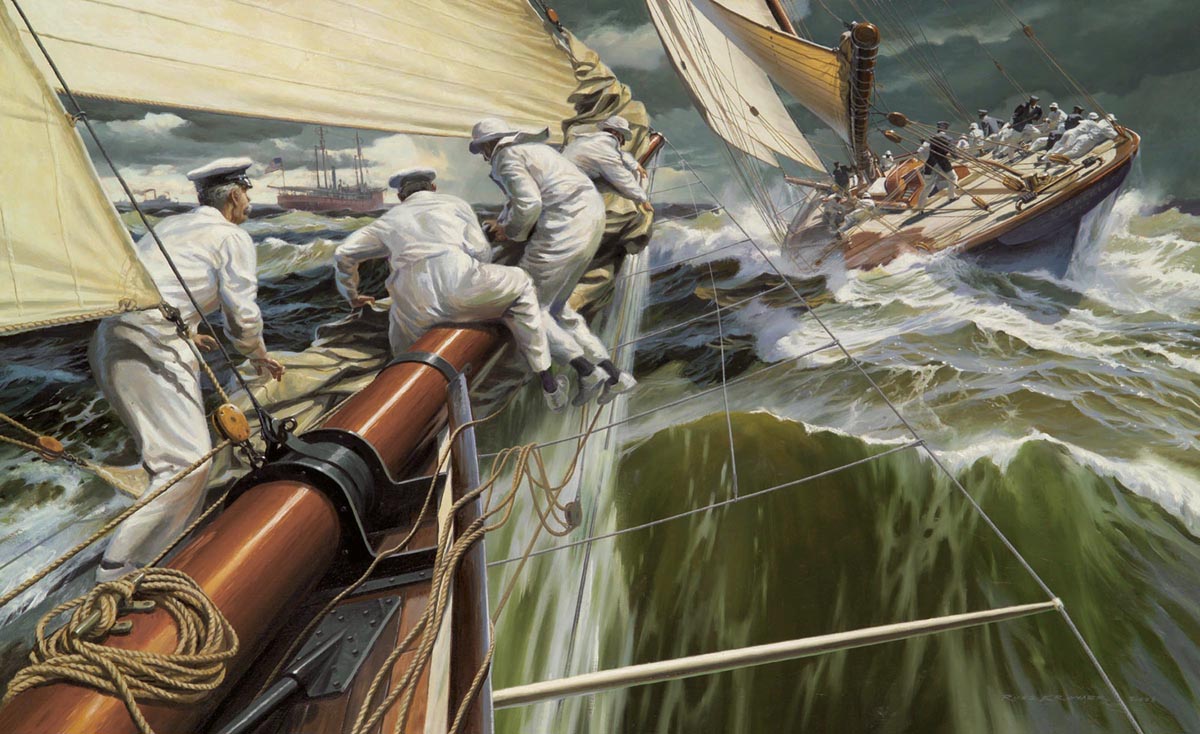 Crew aboard VIGILANT drop a jib topsail as the skies darken at the start of the third race of the America’s Cup defense, Friday the 13th of October, 1893. Though ahead throughout, challenger VALKYRIE II would find bad luck on the stormy run home, losing her enormous spinnaker, handing a close victory to VIGILANT.

In the 1893 America’s Cup Vigilant faced Valkyrie II in a best three out of five races format sailed on alternating courses. The races were sailed October 7, 9, and 13, 1893 just south of New York. The first and third races were 15 miles to windward off Scotland Lightship and return to leeward, the second race was a 30 mile equilateral triangle.[3] Lord Dunraven’s daughter became the first female to sail in an international yacht race in the United States.

In the first race on October 7, in light air, Valkyrie II won the 11:25 am start by 15 seconds and one boat length. At the first mark, Vigilant held a nine minute lead. Vigilant crossed the finish line 7 minutes ahead ofValkyrie II—8 minutes 48 seconds in corrected time.

In the second race on October 9, Vigilant won the 11:25 am start by 5 seconds, but Valkyrie II worked out to an early lead of 5 boat lengths in a building 24 miles per hour (39 km/h; 21 kn) breeze. By the first mark, Vigilant held a five minute lead and worked out to a 9 minute lead at the second mark. At the finish Vigilant beat Valkyrie II by 12 minutes 30 seconds—10 minutes 35 seconds in corrected time.

In the third race on October 13, 1893, Lord Dunraven, was facing elimination but was certain the Valkyrie II could equal or better Vigilant in the strong breeze. Valkyrie II led the windward leg, but lost a spinnaker at the two-thirds point of the downwind run. At the finish, Vigilant beat Valkyrie II by 40 seconds in corrected time to successfully defend the cup. The World reported it as the fastest race ever sailed, over a course of 15 miles to windward and return under reefed sail and a gale. Source: Wikipedia

Russ Kramer writes: “I love this era of the great cutters that vied for the cup around the turn of the century. Reference photos are hard to come by, but I was able to recreate accurately the bowsprit details aboard VIGILANT from the original blueprints, thanks to the wonderful Herreshoff Museum in Bristol, RI. The title is an homage to the great marine artist J. Steven Dews, who also painted this contest; his painting bears the same title.”